The son of Neptune
(Playaway) 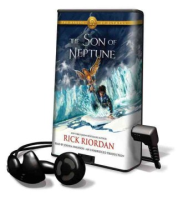 General Note
One set of earphones and one AAA battery required for playback.
General Note
Title from Playaway label.
General Note
"HDAUDIO."
General Note
"Listening Library"--Container.
General Note
Issued on Playaway, a dedicated audio media player.
General Note
Previously released by Random House, Inc., p2011.
Participants/Performers
Read by Joshua Swanson.
Description
After three demigods named Jason, Piper, and Leo visit Camp Half-Blood, they inherit a quest: to free Hera, a prisoner of Gaia. But who are the other four demigods mentioned in prophesy who will join them in their quest? The answer may lie in another camp miles away, where a new camper has shown up and appears to be the son of Neptune, god of the sea.
Powered By Aspen Discovery supported by ByWater Solutions
v. 22.09.00
CONNECT WITH NOLS
Loading, please wait
...