Robin Hood : the story behind the legend : a novelization
(Playaway) 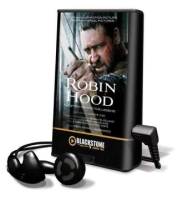 General Note
Title from Playaway label.
General Note
Release date supplied by publisher.
General Note
Previously released by Blackstone Audio, Inc., p2010.
General Note
Issued on Playaway, a dedicated audio media player.
General Note
In container (21 x 13 x 3 cm.).
General Note
One set of earphones and one AAA battery required for playback.
General Note
"Now a Major Motion Picture from Universal Pictures"--Container.
General Note
"The story behind the legend"--Container.
Participants/Performers
Read by Robin Sachs.
Description
In 13th century England, the legendary figure known by generations as Robin Hood leads an uprising that will forever alter the balance of world power and will make one man of humble beginnings an eternal symbol of freedom for his people. An expert archer once interested only in self-preservation, Robin now serves in King Richard's army. Upon Richard's death, Robin travels to Nottingham, a town suffering from a despotic sheriff and crippling taxation. There he falls for the spirited widow Lady Marion, who is skeptical of the motivations of this mysterious crusader from the forest. Hoping to earn the hand of Maid Marion and to save the village, Robin assembles a gang whose lethal mercenary skills are matched only by its appetite for life. Together, they begin preying on the indulgent upper class to correct the injustices of the sheriff.
Powered By Aspen Discovery supported by ByWater Solutions
v. 22.09.01
CONNECT WITH NOLS
Loading, please wait
...