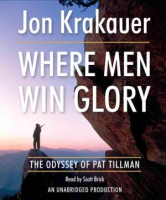 General Note
Unabridged.
General Note
Compact discs.
Participants/Performers
Read by Scott Brick.
Description
Irrepressible individualist and iconoclast Pat Tillman walked away from his $3.6 million NFL contract in May 2002 to enlist in the United States Army. Deeply troubled by 9/11, he felt a strong moral obligation to join the fight against al-Qaeda and the Taliban. Two years later, he died on a desolate hillside in Afghanistan. Though obvious to most on the scene that a ranger in Tillman's own platoon had fired the fatal shots, the Army aggressively maneuvered to keep this information from Tillman's family and the American public for five weeks following his death, while President Bush repeatedly invoked Tillman's name to promote his administration's foreign policy. Biographer Krakauer draws on his journals and letters, interviews with his wife and friends, conversations with the soldiers who served alongside him, and extensive research in Afghanistan to render this driven, complex, and uncommonly compelling figure as well as the definitive account of the events and actions that led to his death.
Powered By Aspen Discovery supported by ByWater Solutions
v. 22.09.00
CONNECT WITH NOLS
Loading, please wait
...