A tale for the time being
(Audiobook CD) 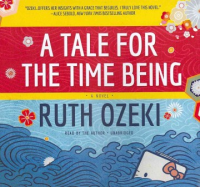 General Note
Title from web.
General Note
Compact discs.
General Note
"Tracks Every 3 Minutes."
General Note
Duration: 14:12:00.
Creation/Production Credits
Produced by Penguin Group (USA), Inc.
Participants/Performers
Read by the author.
Description
In Tokyo, sixteen-year-old Nao has decided there's only one escape from her aching loneliness and her classmates' bullying. But before she ends it all, Nao first plans to document the life of her great grandmother, a Buddhist nun who's lived more than a century. A diary is Nao's only solace--and will touch lives in ways she can scarcely imagine. Across the Pacific, we meet Ruth, a novelist living on a remote island who discovers a collection of artifacts washed ashore in a Hello Kitty lunchbox--possibly debris from the devastating 2011 tsunami. As the mystery of its contents unfolds, Ruth is pulled into the past, into Nao's drama and her unknown fate, and forward into her own future.
Description
Nao Yasutani is a Japanese schoolgirl who plans to to kill herself as a way of escaping her dreary life. First, though, she intends to write in her diary the life story of her great-grandmother Jiko, a Zen Buddhist nun. But Nao actually ends up writing her own life story, and the diary eventually washes up on the shore of Canada's Vancouver Island, where a novelist called Ruth lives.
Powered By Aspen Discovery supported by ByWater Solutions
v. 23.01.02
CONNECT WITH NOLS
Loading, please wait
...