Unbroken : an Olympian's journey from airman to castaway to captive
(Book) 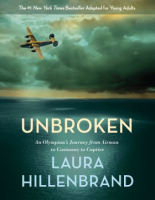 The one-boy insurgency
Run like mad
The torrance tornado
Plundering Germany
The red circle
The flying coffin
"This is it, boys"
Dying in droves
Five hundred and ninety-four holes
"The whole island was blowing up"
"Nobody's going to live through this"
Downed
Missing at sea
Thirst
Sharks and bullets
Singing in the clouds
Typhoon
A dead body breathing
"No one knows you're alive"
Farting for Hirohito
Belief
Plots afoot
Monster
Hunted
"He's alive!"
Madness
Falling down
Enslaved
Two hundred and twenty punches
The boiling city
The naked stampede
Cascades of pink peaches
Mother's Day
The shimmering girl
Coming undone
The body on the mountain
Twisted ropes
The promise
Daybreak.

General Note
"Adapted for young adults."
General Note
Original version published: New York : Random House, c2010.
General Note
Includes index.
Bibliography
Includes bibliographical references and index.
Description
"On a May afternoon in 1943, an American military plane crashed into the Pacific Ocean and disappeared, leaving only a spray of debris and a slick of oil, gasoline, and blood. Then, on the ocean surface, a face appeared. It was that of a young lieutenant, the plane's bombardier, who was struggling to a life raft and pulling himself aboard. So began one of the most extraordinary sagas of the Second World War. The lieutenant's name was Louis Zamperini."--Book jacket.
Powered By Aspen Discovery supported by ByWater Solutions
v. 22.11.00
CONNECT WITH NOLS
Loading, please wait
...