The boys in the boat : the true story of an American team's epic journey to win gold at the 1936 Olympics
(Book) 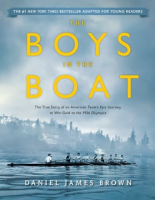 General Note
"This work is based on The boys in the boat : nine Americans and their epic quest for gold at the 1936 Berlin Olympics"--Title page verso.
General Note
Includes index.
Description
"Out of the depths of the Great Depression comes the astonishing tale of nine working-class boys from the American West who at the 1936 Olympics showed the world what true grit really meant. With rowers who were the sons of loggers, shipyard workers, and farmers, the University of Washingtons eight-oar crew was never expected to defeat the elite East Coast teams, yet they did, going on to shock the world by challenging the German boat rowing for Adolf Hitler."--Amazon.com.
Powered By Aspen Discovery supported by ByWater Solutions
v. 22.09.01
CONNECT WITH NOLS
Loading, please wait
...