The boys in the boat : the true story of an American team's epic journey to win gold at the 1936 Olympics
(Audiobook CD) 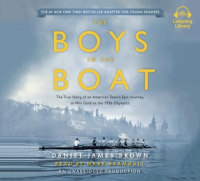 General Note
Title from container.
General Note
Compact discs.
General Note
"A young readers adaptation with a new introduction, based on the #1 New York Times bestseller: The boys in the boat : nine Americans and their epic quest for gold at the 1936 Berlin Olympics."
Participants/Performers
Read by Mark Bramhall.
Description
This is the remarkable story of the University of Washington's 1936 eight-oar crew and their epic quest for an Olympic gold medal. The sons of loggers, shipyard workers, and farmers, the boys defeated elite rivals first from Eastern and British universities and finally the German crew rowing for Adolf Hitler in the Olympic games in Berlin, 1936.
Target Audience
Ages 10 to 14.
Target Audience
7-8.
Powered By Aspen Discovery supported by ByWater Solutions
v. 22.09.00
CONNECT WITH NOLS
Loading, please wait
...