The boys in the boat : nine Americans and their epic quest for gold at the 1936 Olympics
(Playaway) 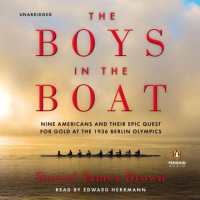