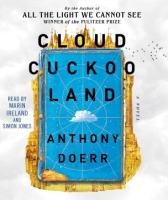 General Note
Title from web page.
General Note
Release date: 09/28/2021.
General Note
Compact discs.
Participants/Performers
Read by Marin Ireland and Simon Jones.
Description
Thirteen-year-old Anna, an orphan, lives inside the formidable walls of Constantinople in a house of women who make their living embroidering the robes of priests. Restless, insatiably curious, Anna learns to read, and in this ancient city, famous for its libraries, she finds a book, the story of Aethon, who longs to be turned into a bird so that he can fly to a utopian paradise in the sky. This she reads to her ailing sister as the walls of the only place she has known are bombarded in the great siege of Constantinople. Outside the walls is Omeir, a village boy, miles from home, conscripted with his beloved oxen into the invading army. His path and Anna's will cross.
Powered By Aspen Discovery supported by ByWater Solutions
v. 23.01.02
CONNECT WITH NOLS
Loading, please wait
...