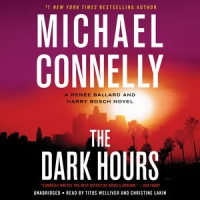 General Note
Compact discs.
Participants/Performers
Read by Christine Lakin and Titus Welliver.
Description
There's chaos in Hollywood at the end of the New Year's Eve countdown. Working her graveyard shift, LAPD detective Reňe Ballard is called to a scene where a hardworking auto shop owner has been fatally hit by a bullet in the middle of a crowded street party. Ballard quickly concludes that the bullet is linked to another unsolved murder--a case at one time worked by Detective Harry Bosch. At the same time, Ballard hunts a fiendish pair of serial rapists, the Midnight Men, who have been terrorizing women and leaving no trace. Determined to solve both cases, Ballard must go outside to the one detective she can count on: Harry Bosch.
Powered By Aspen Discovery supported by ByWater Solutions
v. 22.11.00
CONNECT WITH NOLS
Loading, please wait
...