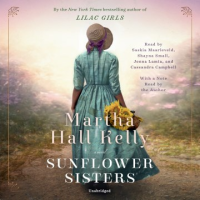 General Note
Compact discs.
Participants/Performers
Read by Saskia Maarleveld, Shayna Small, Jenna Lamia, Cassandra Campbell ; with a note read by the author.
Description
Georgeanne "Georgey" Woolsey isn't meant for the world of lavish parties and demure attitudes of women of her stature. So when the war ignites the nation, Georgey follows her passion for nursing during a time when doctors considered women a bother on the battlefront. In proving them wrong, she and her sister Eliza venture from New York to Washington, D.C., to Gettysburg and witness the unparalleled horrors of slavery as they become involved in the war effort. In the South, Jemma is enslaved on the Peeler Plantation in Maryland, where she lives with her mother and father. Her sister, Patience, is enslaved on the plantation next door and both live in fear of LeBaron, an abusive overseer who tracks their every move. When Jemma is sold by the cruel plantation mistress Anne-May at the same time the Union army comes through, she sees a chance to finally escape but only by abandoning the family she loves.
Powered By Aspen Discovery supported by ByWater Solutions
v. 22.11.00
CONNECT WITH NOLS
Loading, please wait
...