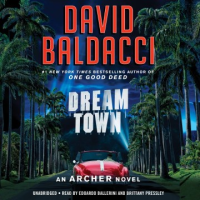 General Note
Title from container.
General Note
Compact discs.
Participants/Performers
Read by Edoardo Ballerini and Brittany Pressley.
Description
It is New Year's Eve, 1952 in Los Angeles. Private Investigator, Aloysius Archer, is dining with his friend and rising Hollywood star, Liberty Callahan, when they're approached by Eleanor Lamb, a famous screenwriter, who would like to hire him as she suspects someone is trying to kill her. A visit to Lamb's Malibu residence leaves Archer in no doubt of foul play when he's knocked unconscious entering the property, there's a dead body in the hallway and Eleanor seeming to have vanished. With the police now involved in the case, a close friend and colleague of Lamb's employs Archer to find out what's happened to Eleanor. Archer's investigation will take him from the rich and dangerous LA to the seedy and even more dangerous side of the city where cops and crooks work hand in hand. He'll cross paths with Hollywood stars, politicians and notorious criminals. He'll almost die several times, and he'll discover bodies from the Canyon to the Malibu beaches. And, with the help of Liberty and the infamous Willie Dash, he'll leave no stone unturned in trying to find out who Eleanor Lamb really was. Because 1953 Hollywood is a place where you have to survive regardless of who has to be sacrificed to get there.
Powered By Aspen Discovery supported by ByWater Solutions
v. 22.11.00
CONNECT WITH NOLS
Loading, please wait
...