Fencing with the king
(Playaway) 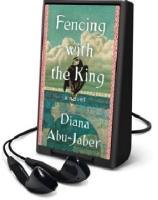 General Note
Release date supplied by publisher.
General Note
Issued on Playaway, a dedicated audio media player.
General Note
One set of earphones and one AAA battery required for listening.
General Note
Originally published by OrangeSky Audio ℗2021
Participants/Performers
Read by Rasha Zamamiri.
Description
"The King of Jordan is turning 60! How better to celebrate the occasion than with his favorite pastime--fencing--and with his favorite sparring partner, Gabriel Hamdan, who must be enticed back from America, where he lives with his wife and his daughter, Amani. Amani, a divorced poet, jumps at the chance to accompany her father to his homeland for the King's birthday. Her father's past is a mystery to her--even more so since she found a poem on blue airmail paper slipped into one of his old Arabic books, written by his mother, a Palestinian refugee who arrived in Jordan during World War I. Her words hint at a long-kept family secret, carefully guarded by Uncle Hafez, an advisor to the King, who has quite personal reasons for inviting his brother to the birthday party. In a sibling rivalry that carries ancient echoes, the Hamdan brothers must face a reckoning, with themselves and with each other--one that almost costs Amani her life."--,Provided by publisher
Powered By Aspen Discovery supported by ByWater Solutions
v. 23.01.02
CONNECT WITH NOLS
Loading, please wait
...