What happened to the Bennetts : a novel
(Audiobook CD) 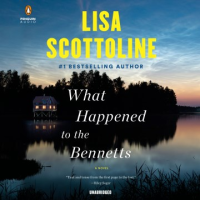 General Note
Title from disc label.
General Note
Subtitle from container.
General Note
Compact discs.
Participants/Performers
Performed by Edoardo Ballerini.
Description
Jason Bennett is a suburban dad and an elite court reporter, but one night, his life takes a horrific turn. He is driving with his family home after his daughter's field hockey game when a pickup truck begins tailgating them on a dark stretch or road. Suddenly two men jump from the pickup and pull guns on Jason, demanding the car. He complies, getting his family and their dog out of the car. But when the dog leaps at one of the carjackers, a gun goes off. Jason hears a scream behind him, and his daughter falls to the street. Then there's another gunshot, as one carjacker shoots the other point-blank, killing him. The killer runs back to the pickup truck and drives away, leaving Jason to watch his daughter die. Later that awful night, Jason and his family receive a visit from the FBI. The agents tell them that the carjackers were members of a dangerous criminal organization distributing opiates in southeastern Philadelphia and northern Delaware. Now Jason and his family are in their crosshairs. The agents advise the Bennetts to enter the witness protection program, or WITSEC, right away, and they have no choice but to agree. But WITSEC was designed to protect criminal informants, not law-abiding families. Taken from all they know, trapped in an unfamiliar life, the Bennetts begin to fall apart at the seams. Jason sneaks out one night and discovers a startling fact that throws into doubt everything the government has been telling him. He learns a shocking truth and realizes that he has to take matters into his own hands.
Powered By Aspen Discovery supported by ByWater Solutions
v. 22.09.00
CONNECT WITH NOLS
Loading, please wait
...